For nearly four decades, GOLF’s esteemed course rankings have guided golfers where to play, which explains their immense and enduring popularity. Yet, in the United States, access to many top-rated courses is problematic for a majority of golfers, as is cost — a concern readers have raised with us. Please know: We’ve heard you! In June, we debuted our inaugural ranking of America’s best municipal courses, and now, two months later, we’re happy to present another bargain-minded list: the Top 100 Value Courses in the U.S., all which you can play for $150 or less, in many cases much less.

Think of this ranking as a celebration of the budget-friendly courses that you could play several times — maybe more — every year. Sure, big-ticket bucket-list courses are fun to dream about or play once or twice in your life, but courses you can visit regularly help define the quality of your golf life. It’s hard to overstate their importance.

What constitutes “budget-friendly,” of course, is in the eye — or wallet — of the beholder, which led to fierce debate among our raters and GOLF staffers about where to draw the line for this list. The Top 100 Courses You Can Play for $100 or Less has a nice ring to it, but after some teeth gnashing, we collectively decided to cast a slightly wider net and draw the line at $150 — with a caveat: For a course to make the list, $150 would be the absolute most you would pay to play it in peak season.

Some private clubs allow outside play, and we decided to include them in the mix, too (as we do with our flagship Top 100 Courses You Can Play list), assuming they meet the fee criteria. Among those courses is Belvedere Club, in Charlevoix, Mich., where Golden Age architect William Watson is just now getting his due; Belvedere’s set of greens may rank in the top 50 in the country — public or private. (On the day I played Belvedere — which has adopted the U.K. model of allowing outside play at certain times — the cost was well under $100. What a deal. As a big believer in the notion that great architecture should be shared, I tip my hat to the club.)

Many of the country’s top municipal courses that we identified earlier this year also made our list and represent tremendous value. Take Manakiki, just east of Cleveland. For a peak weekend rate of $44, you get a secluded Donald Ross course with a scintillating routing that takes full advantage of dramatic landforms. Cleveland Metroparks should be congratulated for serving as such a fine custodian to both Manakiki and Sleepy Hollow, which also makes our list.

Every course featured is worth your dollars, as they offer inspiring architecture at a reasonable rate. We’re hopeful that you’ll feel impelled to support these courses by visiting often. When the experience is more valuable than the expense, you are playing somewhere special — and that’s what this ranking is all about.

Methodology: How we rate courses | Meet our expert panelists

Green fees are published 18-hole walking rates (or inclusive of cart fees when carts are mandatory). Asterisk denotes rates that are subject to change based on seasonal and/or dynamic pricing.

The Black intimidates golfers with a sign at the 1st tee that recommends the course “only for highly skilled golfers.” Among the highly skilled? Tiger Woods, who won the 2002 “People’s Open,” as that U.S. Open came to be known. Woods was the only golfer to break par for 72 holes, owing to rugged, uphill par-4s, massive bunkers and the wrist-fracturing rough found on this Rees Jones-restored A.W. Tillinghast layout. The Black is one of the great routings, highlighted by the masterful way Tillinghast placed the fairways and greens from the 2nd hole in a valley all the way through the dogleg left 9th. The par-5 4th and its iconic cross-bunkering is a world-beater.

Golden Age masters Langford & Moreau spent nearly $4 million in 2020 dollars to build this literally ground-breaking Wisconsin layout. Steam shovels shaped its most spectacular features, including some of the boldest putting complexes on the planet. Rumor has it a boxcar was buried under the 7th green to create the dramatic 20-foot drop-off. The result of all this mechanical wizardry? Possibly the most underrated course in America and its greatest golfing value. We almost feel guilty finally sharing the secret. (For more, see video above.)

Out amid the red rocks of southern Utah, a camera is almost as vital as your clubs. Against this National Geographic backdrop, Sand Hollow cuts a photogenic path, its holes specked with spiky desert vegetation and red-sand bunkers that complement their ruddy, stone surrounds. While the front nine is eye-catching, the back nine almost needs to be seen to be believed. Carved along the ridges of a lands-end plateau, it flows from one catch-your-breath vista to another. Aim and swing, then point and shoot.

George Thomas, who worked magic in a canyon when building Riviera, is a hero to Rustic Canyon’s designers. Here, about an hour’s drive (traffic dependent!) north of Riviera, Gil Hanse, Jim Wagner, and Geoff Shackelford conjured a design that would have impressed even Thomas. The imaginative use of washes throughout and the horseshoe 13th green are but a few of the challenges. Aerial views highlight how peacefully the holes occupy the valley floor, and the course enjoys a legion of fans who prefer minimalism. Hard to find a better bang for the buck west of the Rockies.

The Sand Hills of Nebraska are best known to golf buffs for a high-ranked private club of the same name. This is the Everyman’s equivalent. For less than what a caddie costs at its exclusive counterpart, Wild Horse offers a kindred golf experience, with firm, fast fairways and rough-lipped bunkers gouged out of the rolling terrain. While the big skies and open spaces are pure prairie, the bouncy conditions and wind-whipped native grasses create the look and feel of a course across the pond. Think links golf, minus the sea.

To say that both the property and the greens are rolling is an understatement! Whatever preconceived notions you might have about Donald Ross greens, they will be blown out of the water with one tour around this 1917 design, which was deemed such a good test that it quickly hosted the 1924 PGA Championship. The 8th green, with its six feet of fall from back to front, gets most of the attention, but a green like 17 that drops more than three feet from its high right plateau to a lower left tier is just as astonishing. Three of the par-3s measure 240, 250 and 250 yards and may well constitute Ross’s most bruising collection of one-shotters.

Whatever preconceived notions you have about Ross greens will be blown out of the water at French Lick. 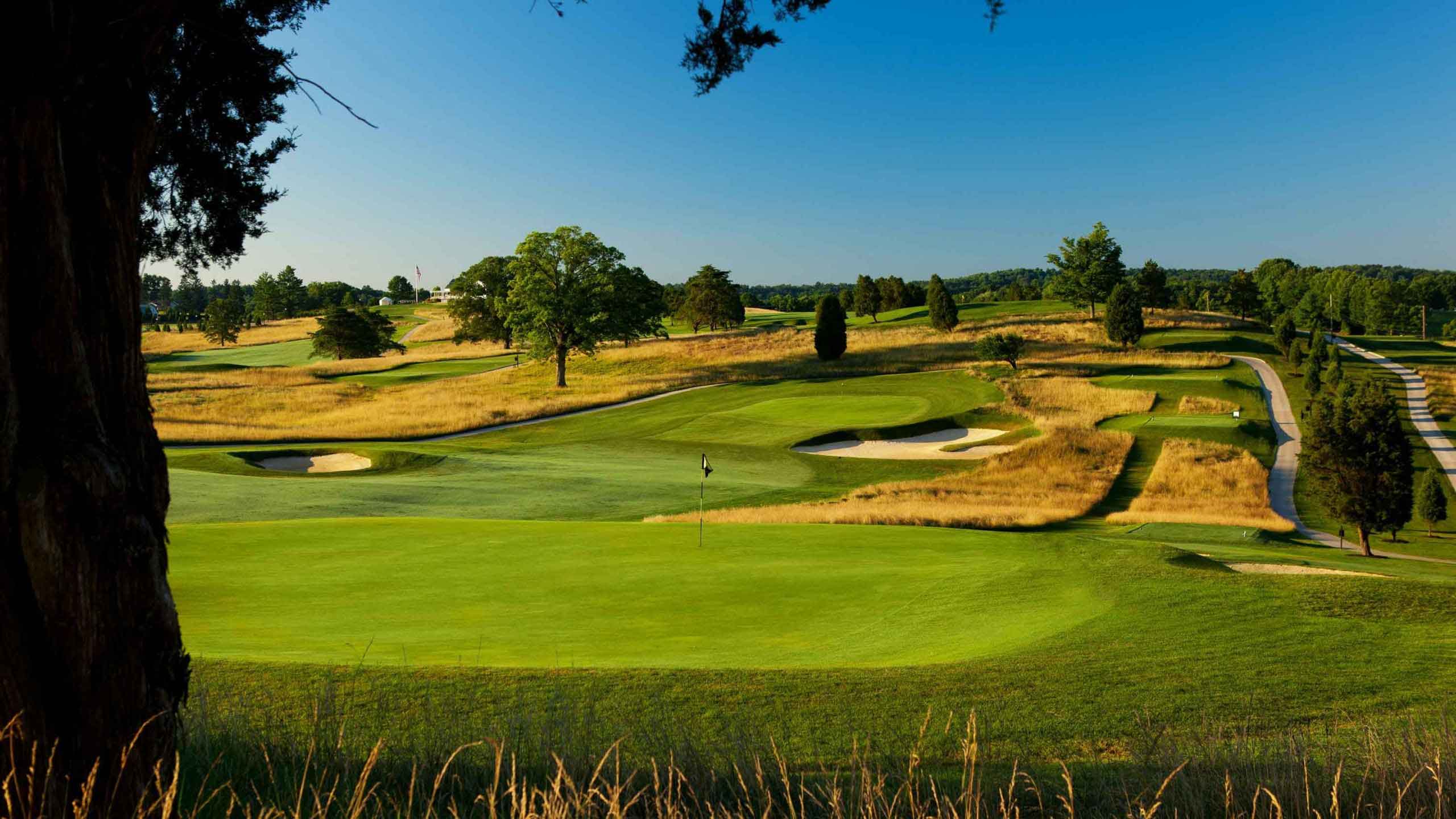 A WPA project in the late 1930s, this course thankfully came deep in Ross’ career, because it is hard to fathom that he would have had the ability to design so many outstanding holes on this rocky site if he had just arrived from Scotland where all he knew was sandy soil. Fast-forward…