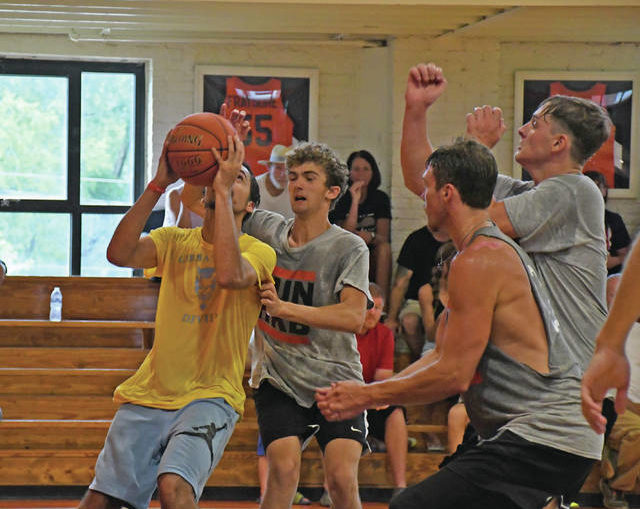 As it hits the halfway point of its inaugural season, the Augusta Park League is off to a successful start.

The league originally organized last year by Augusta alum Camryn Snapp and others to form a streetball basketball league has created a competitive, mostly friendly environment for people wishing to play and watch basketball on Sunday’s in Augusta.

The downtown blacktop has provided many tight games through the first four weeks.

The league idea was to create a balanced league and for the most part has lived up to the billing through the first four weeks. Teams were initially drafted by eight general managers who expressed interest in running and organizing a team for the summer league that started June 6. Former Robertson County boys’ basketball coach Patrick Kelsch is the commissioner.

“We’re pleased with how it has progressed. With a lot of things that are new and fresh and exciting it garners a lot of attention and interest and then might fall off. But after a month we think the interest is increasing There’s been some bumps in the road and things we can change, but all in all first four weeks, we’ve had 75-80 percent of the games really competitive. It’s been a good mix of young talent and some of the older talent teaching younger guys how to play the game,” Kelsch said.

The general managers took part of a live, snake draft order style to compile their teams together. Each GM drafted eight players in a pool of 64 players to create their team, team name and get uniforms together.

“The competitiveness has a lot to do with how we set it up. All of the eight GMs are familiar with local talent. Not really any GMs from outside the area so everyone knew who everyone was for the most part and it’s helped create a lot of parity,” Kelsch said.

Game play involves four 10-minute quarters with officials and fouls and stats recorded. Each game also has an Elam Ending, similar to what the TBT (The Basketball Tournament) and NBA All-Star game offered this past season where a target score is set in the closing minutes of the fourth quarter, the game clock is turned off and games have to end with a bucket or free throw.

Each team was asked for a entry fee to help pay for the officials, t-shirts and awards given out throughout the season. The GMs help keep stats, score and announce each game.

While no admission is charged for fans to come watch, the league has helped being operated by local sponsors to help pay for the overhead costs.

“The GMs were responsible for getting uniforms and t-shirts, a lot of what we have done is due to our sponsors. These are businesses that have taken an interest in basketball and put their money out there to pay officials and things like that,” Kelsch said.

The league is in demand with numbers in the double-digits of players that want to join the league that missed the initial sign-up period. A waiver wire was created for players who want to play and can replace someone already in the league that may miss the rest of the season due to injury or other obligations. It’s a first come, first serve basis on the waiver wire.

Another plus to the league if inclement weather persists to keep from having the game on the blacktop, games can be moved to the Augusta High School gym, one of the more unique gyms in the state to continue play on Sunday’s, the case of what happened in week two. Talks are in the works to have the postseason tournament played inside the gym all day on August 1.

The initial season was supposed to start last summer, but COVID restrictions kept it from happening.

As with anything that’s new, some tweaks will be made in the future and some ideas such as an All-Star team to play against a Northern Kentucky Idlewild streetball league is in the mix as well as putting that team in the Maysville Classic to represent the league.

Games are played on Sunday from 2-5 p.m. with the regular season having three more weeks.

The postseason will then follow on August 1 with an eight-team, single elimination tournament taking place based upon seeding from regular season standings.

Commissioner Kelsch has put together weekly highlight videos and recaps with help in graphics and highlights from GM Todd Kelsch and some other members of the league as well as season scoring leaders, rebounding leaders and assist leaders.

T-shirts will be awarded to the postseason champ and Player of the Week awards have been handed out for who has excelled that week.

It’s been a good mix of youth mixed in with former local standouts in gameplay, creating a solid dynamic for those still having interest in the competitive nature of the game as well as the youth learning about the game.

An estimated 50-100 people are on hand each game to come watch.

“One thing about the 10th Region and surrounding counties, they are passionate about basketball. If a game is going on, people are going to watch,” Kelsch said. “We attribute a lot to what going on in with interest and people passionate about basketball in the area. If I was a young kid or a teenager and I heard Shawn Myrick, Pig Williams, Dorian Henry and others were playing and I heard those names I’d have a front seat, especially if free to watch.”