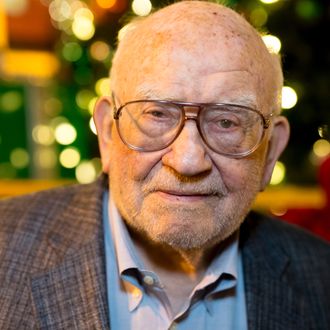 Photo: Getty Images for The Salvation A

Ed Asner, an actor whose career in film and television spanned eight different decades from the late 1950s up to 2021, has died at the age of 91. Deadline reports that he died “peacefully Sunday morning, surrounded by family.” Asner was best known for playing newspaper editor Lou Grant in both The Mary Tyler Moore Show and his own spinoff series, Lou Grant, a role that won him five acting Emmys for both Comedy and Drama. Asner also won two acting Emmys for his performances in Rich Man, Poor Man and Roots. With seven Emmys total, Asner remains unbeaten as the most-awarded male actor in Primetime Emmy history. Asner also pulled off the notable feat of successfully adapting his Lou Grant performance from half-hour sitcom to hour-long drama.

Asner appeared on The Mary Tyler Moore Show for 166 episodes between 1970 and 1977, and transitioned that same year to starring in Lou Grant, which also ran for over 100 episodes and focused on social issues ranging from gay rights to mental illness to ethics in journalism. In his personal life, Asner was also an activist, belonging to the Democratic Socialists of America, campaigning for single-payer health care in California, and sitting on numerous nonprofit advisory boards. Asner served as president of the Screen Actors Guild from 1981 to 1985.

Later in his career, Asner became known to a whole new generation for his role as Santa Claus in the 2003 Christmas classic Elf and for voicing curmudgeonly hero Carl Fredricksen in Pixar’s 2009 Oscar-winning animated film, Up. Asner never stopped working, whether doing voiceover for Disney video games or making guest appearances on series like Cobra Kai and Grace and Frankie. As he told The Hollywood Reporter this past Thursday, August 26, “I’m waiting for the next gig,” and as for his bucket list, “I haven’t climbed Suribachi! No, I think just ensuring that I’ve left enough for the family.”