This Slovenia Love Bridge Is Home To Some Ironic Landmarks 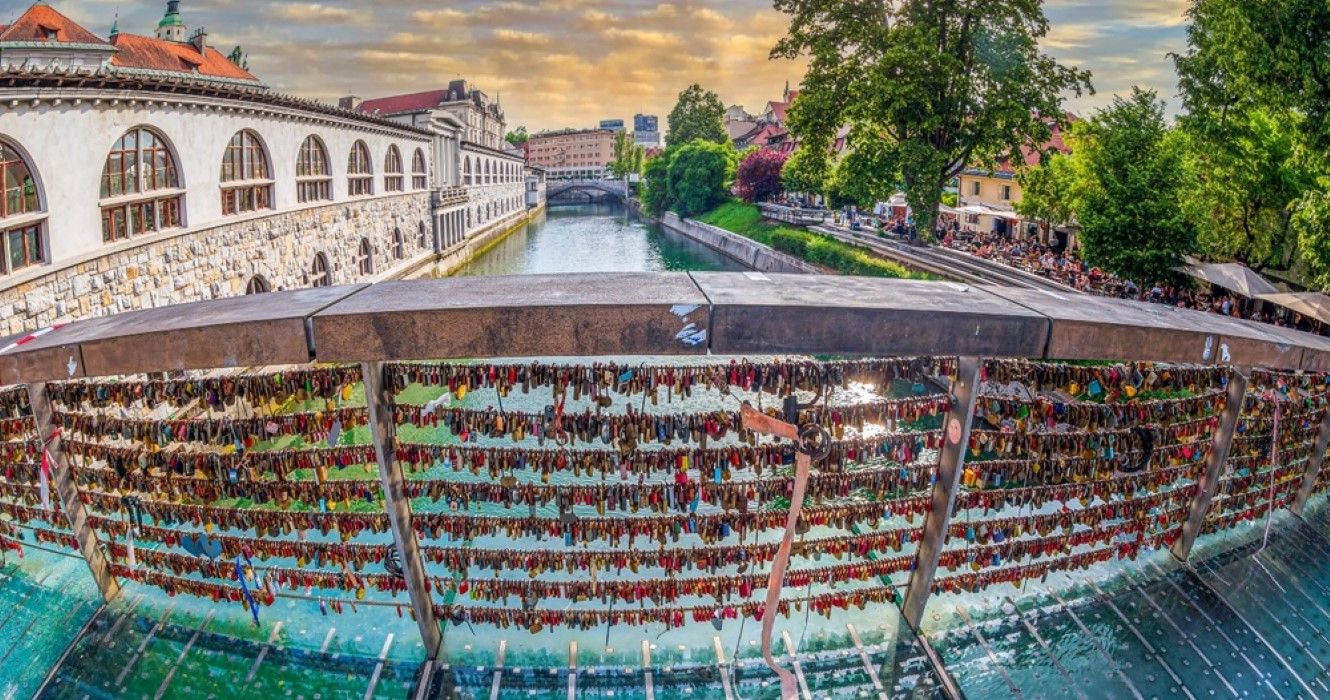 Slovenia is an underrated East European gem that’s, in most cases—puzzlingly underrated in travel circles. For those who’ve not visited this small country in Central Europe, Slovenia has a stunning natural landscape that’s perhaps only comparable to that of Switzerland, yet at the same time significantly cheaper. Sitting calmly at the edge of the Balkans, Slovenia’s terrain is gorgeously lush, spectacularly mountainous, and thickly forested. In fact, Slovenia is the third most forested country in Europe.

THETRAVEL VIDEO OF THE DAY

The capital of Slovenia is Ljubljana—a name that’s hard to pronounce but easy to comprehend. Like many European cities, the city of Ljubljana has a river flowing right through it, enhancing its natural charm—and giving rise to riverfront cafés as well picturesque restaurants and beautiful bridges. Among the bridges in Ljubljana is a love bridge that has some strange and ironic landmarks.

Here’s What You Need To Know About Slovenia Love Bridge

Bridges tell a story about a country’s history, her people—and their struggles. And Ljubljana is home to many such bridges; some magical, others ordinary. This love bridge is located in the heart of Slovenia’s capital and connects the Ljubljana Central Market to the Petkovsek Embankment. It’s a place where love is padlocked—and the keys were literally thrown down into the Ljubljana river which flows below. On visiting, one will see the many colorful padlocks that are hung on the side rails—evidence of hearts sealed with unspoken vows of living together until death, as the adage goes, should occasion separation.

The padlocks come in different shapes and sizes, makes, and colors—just like the many shades and ideas of love. Some padlocks have messages of love and devotion engraved on them. Others are vocal in different ways. To make things convenient for lovers, there’s a souvenir shop nearby, as well as larger shopping malls, where lovers can buy a padlock before walking over to the bridge to lock their love.

Related: Things To Do In And Around Lake Bled, Slovenia, That Won’t Break A Budget

Slovenia’s love bridge is steeped in several ironies. The first is the name itself. Who would expect a love bridge to be called Butchers’ Bridge? Yes, that’s the name of this bridge. The name “butcher” conjures up violence and loss of life—even if only of animals. And then, the name “butcher” isn’t everyone’s idea of romance. So how did this love bridge come to be called Butchers Bridge? It turns out that it was built on the site where butchers used to reside as well as ply their blood-stained trade. There are even figures that show butchers on their way to trade. Visitors can see these depictions on the bridge’s side rails. So, yes, the name is a carry-on of the place’s legacy. But as we’ve seen, the irony isn’t just in the name. This bridge features some statutes and artistic forms that are as intriguing as they are disconcerting. For instance, there’s a large statue of a disemboweled man. It’s believed that this is the statute of Prometheus.

According to Greek mythology, Prometheus, which means “foresight,” was the Greek god of fire. He was also a consummate craftsman who’s known to have molded man out of the mud in a myth that strangely mimics the Biblical narrative. The reason Prometheus appears on this bridge disemboweled—relates to how this crafty god was punished by Zeus, the Greek god of the sky—and the leader of all the Greek gods, for having provided humanity with fire. It’s a matter of conjecture that Zeus didn’t want humans to have the fire. But as the story goes, Prometheus was chained to a rock somewhere in the Caucasus. In this unenviable state of utter helplessness, an eagle would then swoop down to feast on his liver. This would go on over and over to extract from Prometheus maximum pain and humiliation. Why this gory depiction is on display at a place set aside for love and romance is quite puzzling.

And it’s not just the statute of Prometheus. Butchers’ Bridge features several other creepily deformed images; some small, others large, but which all seem completely out of place. These include some skulls and a number of creepy-looking frogs.

Related: Here’s How To Spend A Perfect Weekend In Ljubljana, Slovenia.

The History Of Slovenia’s Butchers’ Bridge

While the Butchers’ Bridge was only built in 2010, its idea and concept were envisaged by Slovene architect Jože Plečnik—over a century ago. As an architect, Jože Plečnik also had a profound impact on the modern architecture of Vienna, aside from that of Ljubljana. The original concept was more complex and elaborate as opposed to a simpler version that eventually ensued. For instance, it was to be covered and shaded. Opinions vary as to why the original plan was never followed.

After the idea was first proposed, the Second World War came about—completely disrupting its plans. Even after the end of the war, the plans lay smoldering for many years until, in 2009, the city’s administration launched its construction at the cost of 2.9 million euros.

That’s it. Love is a strange, inexplicable phenomenon. Sometimes it’s sweet. Other times it’s as bitter as wormwood. Slovenia’s Love Bridge is perhaps a representation of that paradox.